Creating Memories Through Art Scroll Down for More Info

In December of 2004 the Colorado Convention Center completed its expansion project. The City of Denver under the 1% for art ordinance, commissioned artist to compete for site-specific proposals in which the artwork reflected and embodied that which is Colorado.

Artist Lawrence Argent and Anne Argent co-owners of Argent Studios at the time, came up with the concept of a very large bear postured outside of the Convention Center peering into the window. A small toy bear was scanned with a three- dimensional laser-scanning device, which converted the shape into a CAD computer file.

From this file Lawrence and his team were able to adjust and change the pose of the bear using an animation software program. The software program transformed the 3-D toy into hundreds of thousands of tiny triangles. 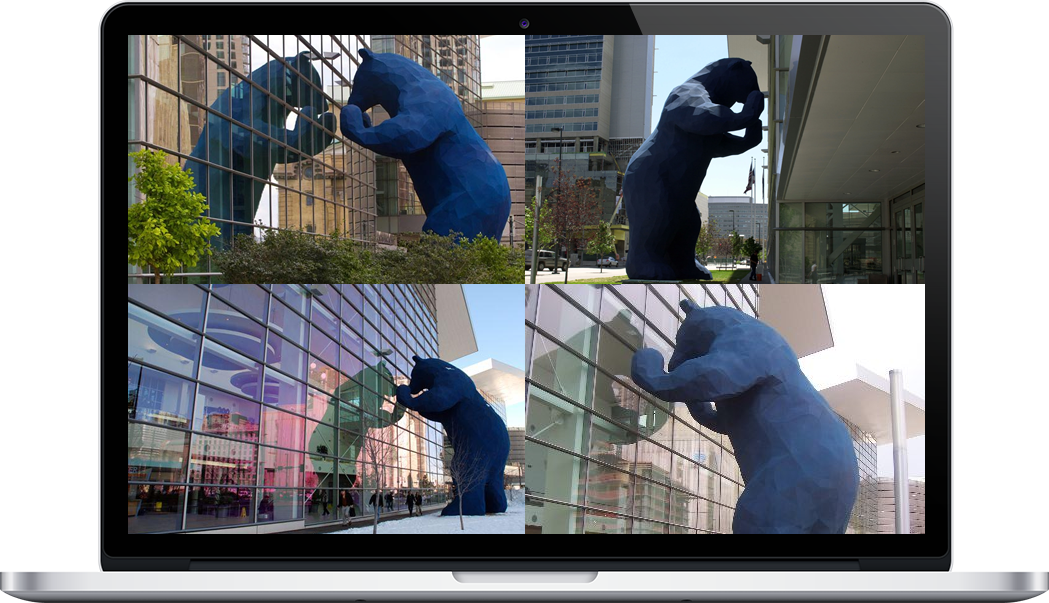 Lawrence played with reducing the amount of triangles until he came up with an abstraction of the original model. The final bear is made up of about 4000 triangles on the surface. The scale of the bear was propositional to the massive size of the Convention Center. The final blue color of the bear was a happy accident. When creating the first small prototype with a 3D printer, the ABS plastic that created the 3D print just happened to be a bright blue in color. Both Lawrence and Anne quite liked the result as blue also represents the Colorado sky. They agreed that the surface color of the final bear would be lapis lazuli in color. This is a rare powerful stone found in few places in the world, one being Colorado.

The 3D files were sent to the fabricator Krysler and Associates in California for the molds. It was decided that the bear would be assembled into six major sections- the left and right legs, the belly, the right and left arm shoulders and the head. These sections were then trucked to Denver where the bear was assembled at the current site.

The head of the bear was the last piece to be fastened. One worker was inside the steal frame structure of the bear fastening and bolting the pieces together. He was able to exit the sculpture from an access panel on top of the bear's head. The six completed subassemblies were then sprayed with a topcoat of pigmented polymer concrete.

Both Lawrence and Anne knew the bear would become to be loved and recognized as an icon for the City of Denver. With the knowledge that the bear could be sized to any scale due to the positive being built in the computer software, they thought it would be amazing for others to have their own "I See What You Mean." mini sculpture. It was then they decided to make available to the public, small replicas of the original artwork. The small sculptures are now housed in many environments and dwellings through out the world.

Peering inquisitively through the large windows at the Denver Convention Center, a 40 foot faceted lapis blue bear appears to be pushing it's nose and paws against the glass, checking out the happenings inside.

KEY FACTS ABOUT THE BEAR

The bear's gesture and size evokes a dialogue between viewer and the viewed. The sculpture is titled, "I See What You Mean." The title itself generates a dialogue between the bear and viewer, placing both in conversation about what they are visually witnessing and sensing. It is a cleaver site-specific bridge between Colorado's fauna and new digital technology.